Check out some cool mentions we got :

Check out the making out GIANTESS ATTACK

The day Jeff Leroy called and ask if I wanted to be the lead of his new film Giantess Attack, my immediate response was ” Hell Yeah!” Sure, without hesitation I wanted a lead role in a movie. Hello, actress, self explanatory. Also, considering the path of my career (the entries of this blog will explain it all) being a Giant Chick running around the screen crushing Hollywood including Scientology (you’re welcome 😜) in a bikini and silver go go  boots seemed on point for my next film endeavor.

Did I think it odd showing up for set day one aka Jeff’s apartment roof. Which Rachel and I had to climb through a death trap roof corridor via rickety gross old latter on the back of his apartment. Surprisingly, no

Thankfully that was not the case. Little did I know this indie micro budget director guy was highly skilled old school special effects artist using similar techniques as George Lucas and Christopher Nolan.  With the use of  models, toys, puppets, his keen eye for camera  and hi-tech editing skills, Jeff is able to bring worlds to life amazingly with budgets that resemble daily catering bills on big budget features.

So without a second thought we climbed onto the roof. Not to our surprise but to our excitement stood miniature city number 1. It  was awesome!  To date it was the coolest set I had ever worked on! It was like an adult playground, an awesome replica of Sunset Blvd and Hollywood Blvd.  YES I totally had the compulsion to crush things. Yes,  we actually crushed the building and cars for real and loved it!

⬆️Check out the video above to see what I’m talking about.⬆️

Two bitter TV stars grow to giant proportions due to a scientific alien accident. They carry on their battle, destroying Hollywood and maybe starting an intergalactic GIANT war…

In the beginning it was just Rachel and I…. Narcissistic star of the to long running “The Super Power Show” / Deidre the b-star diva.

The dim witted side kick to Battle Babe on the “The Super Power Show” / Frida, Deidre’s b-tv star Nemesis.

Alien twins from outer space sent to earth to warn of impending peril. Believing Deidre and Frida are real superheroes, they come bearing gifts, weapons and or GIANT superpowers …

Good ole boy army colonel is on a mission tracking aliens and UFOs. Stumbling onto GIANT Deidre and Frida in a mission to retrieve  high-tech dangerous alien technology, He has no idea the hell that is about to break loose.

A diva actor in his own right destined for bigger things in his own mind . Who needs a B-rate kids TV show? MTV is calling!

Robert Rhine aka Corpsey as

Sleazy, greasy, cheesy  Hollywood talent agent who proudly supports the casting couch and the favor for a favor star system. 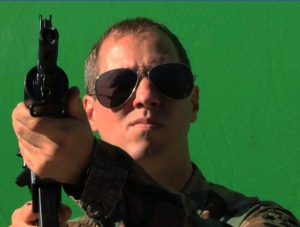 Broken by the women in his life… yet loves the Giantesses…no wait, hates them…or maybe loves them...

Is still feeling the sting of the film GLITTER. What’s that movie?…exactly

Giant babes or not he’s gonna get the job done!

Class A douchebag misogynist . Always there at the wrong time saying the wrong thing.

Deidre and Frida are literally the BIGGEST story of his career.

Battle Babe’s biggest little fan. All he wants is a few selfies and maybe just a little shake and shimmy in Deidre’s bodacious breasts. 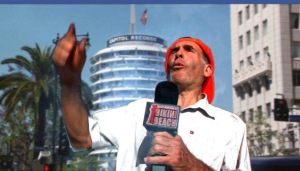 Giant babes in in bikinis, the host of Bikini Beach will be there! 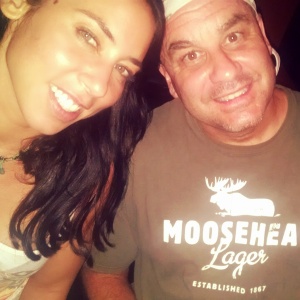 The mad genius behind this crazy cast of characters and the world of Giantess Attack!

Inspired by the shows of the 70’s he had a vision.

The ultimate living cartoon spoof in the form of giant girl power babes and alien twin hotties taking over tinsel town one smashed  building, crushed car and maybe a few eaten people at a time.

This movie is gonna ROCK!

Deidre and Frida, my co-star, Rachel Riley, and I are back to causing havoc in the world of GIANTS!

First thing is first! Time to get serious!

Time to knock a little sense into Robert Rhine of 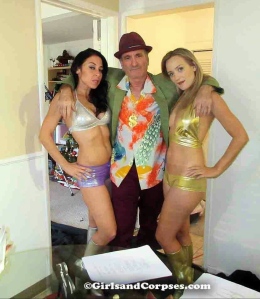 And we’ve had enough of his shyster ways!

Time to teach him a lesson Jeff Leroy style…

Then off to growing giant we go. 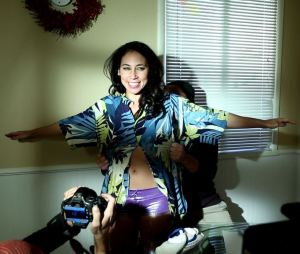 You can’t tell now, but this is the when I grow giant and my clothes rip off my body.

Via the special effects magic of our director Jeff Leroy.

Waiting for the light

and a little last minute direction.

It’s Christmas on the set  of

As their world of being tv super heroes has just taken a tragic turn. 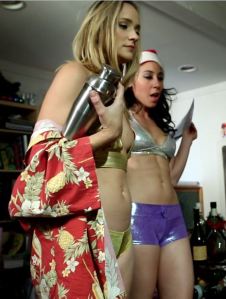 SO odd we have to get a closer look.

I know what you are thinking.

What the hell is that? 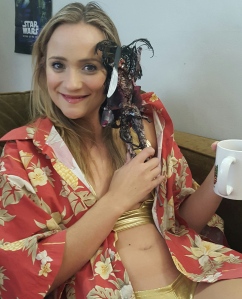 In short, mischievous little pest out to cause havoc. 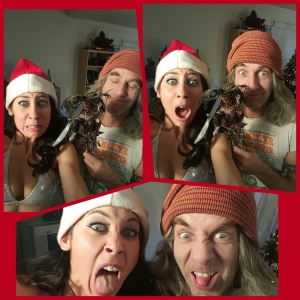 GIANTESS ATTACK the adventure is only getting wilder!

Back on the set of 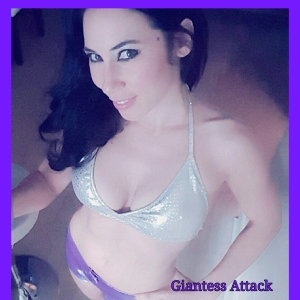 Deidre & Frida are the now the biggest stars in Hollywood 🙂

Checking out our new world as giants in a mini city. 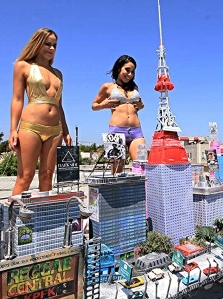 Rachel decides she want to cross the freeway.

Maybe she is little bit hungry…

Maybe she might eat the mini people in the car… 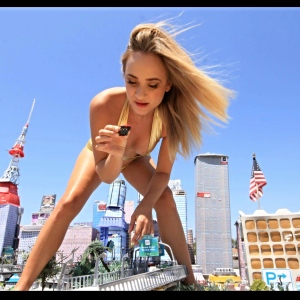 The military is coming to trap me. Hiding behind city buildings and dodging missiles.  There is no way I’m going to let them take me down!

Here is a little behind the scenes I was able to pull off periscope.

In this scene my Giantess character, Deidre, is trying to get away from the government/military who are trying to shoot me down. Granted, you can’t see any of the of the laser being shot at me as this is just step one in the magic of special effects 😉

Here you can see my co-star, Rachel Riley, as her Giantess character Frida is about to step all over / crush downtown LA.

You can check out more on my

Just another day of the set of my movie GIANTESS ATTACK.

Slightly delirious after 10 hour of the shoot but the miniature giant movie must go on!

For this shoot we worked on the super mini model set as this is the part in the movie where we grow EXTRA GIANT! 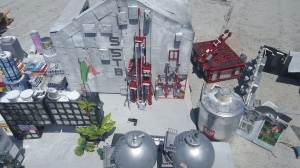 Here is my co-star Rachel Riley. She is looking for someone to eat on the freeway.

Now I am trying to secretly eat a car full of Mariachi singers. 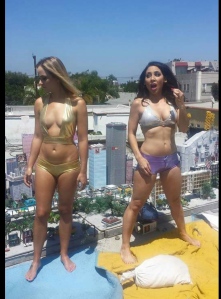 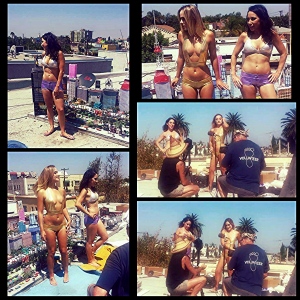 Believe it or not all this will eventually make sense and look amazing 🙂 Thanks to the mad genius skills of our director/editor/producer Jeff Leroy!

We destroyed downtown LA! Jeff is picking pieces after Rachel & I have a girl fight 😉 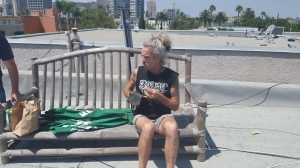 Dave is totally posing and being a very good sport as our all around set do everything guy.

Thanks to everyone who checked my GIANTESS ATTACK behind the scenes videos on periscope.  Obviously I am a newbie to the periscope world but I’m figuring it out.  If you haven’t seen my videos, they are still up!  I have little snippets of make-up, meeting the crew, Rachel & I chilling/chatting/being silly and of course special effects on the miniature sets. FYI being a Giantess is a lot more technical than one might think.

Indie film is not always glamorous but working with this team always fun!

I can’t wait for you all to see the movie when it’s done!!!

! That’s the Giant me holding a mini #ShawnCPhillips 😉 Love being a #BadassBitch #Movie #Hollywood #cultclassic

Yep, that’s me doing a cartwheel through a miniature #LA set.

This is a screen grab from a pre-trailer of the cult movie I am the lead of along w/ Rachel Riley #GiantessAttack. We play two bitter TV stars that grow to giant proportions due to a scientific accident. We then carry on a battle destroying #Hollywood. Directed by #JeffLeroy